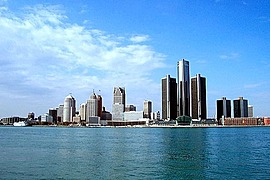 Windsor is the chief port of entry between Canada and The United States. It is often referred to as “the City of Roses” and “the Automotive Capital of Canada.” Strategically located at the center of the Great Lakes Basin directly across from Detroit Michigan, that city’s skyline is visible from Windsor’s shores and separated from it only by the Detroit River. While traveling north, this southernmost Canadian city marks the only border crossing entering the U.S. mainland.