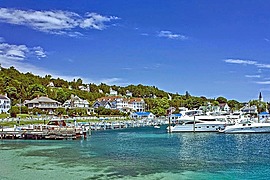 The state of Michigan is the only one of the states to be split into two large land segments: the sparsely populated but mineral-rich Upper Peninsula and Lower Peninsula. Although Michigan developed a diverse economy, it is widely known as the center of the U.S. automotive industry, which developed as a major economic force in the early 20th century. Michigan is a place where it’s easy to find and enjoy the simplest of pleasures. Like sugar-sand beaches, forests that explode with the most vibrant of colors, small towns that welcome you more warmly than a summer day and cities that stir the imagination.