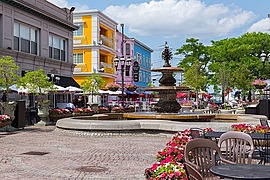 Warwick is a city in Kent County, Rhode Island, known as the third largest city in the state with a population of over 80,000 residents. A city relevant during the Revolutionary War, it is rich in colonial history. Warwick is home to Rhode Island’s main port, T.F. Green Airport, which serves the Providence and Boston areas, making it popular among tourists due to its nearby beaches, saltwater bays, scenic beauty and it's colonial history. Warwick includes a large number of notable colonial villages, and other recognized attractions, including the Historical Warwick Museum of Art, Aldrich Mansion, Warwick Neck Lighthouse, and Clouds Hill Victorian House Museum.