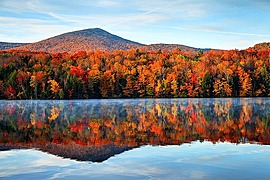 Vermont is the second-least populous and sixth-most extensive of the 50 states of the United States with a population of over 620,000 residents. Dubbed as The Green Mountain State, Vermont’s landscape is characterized by the presence of several trees, which occupy 77% of the state. More than its forested landscape, the state is also known as the number one producer of maple syrup in the US, covered bridges, and ski slopes. Among its recreational spots includes more than 1,000 miles of hiking trails, more than 65 golf courses, and over 6,000 miles of snowmobile trails. Vermont is also famous for mining granite, marble, and official state rocks’ slate. Among the state’s famous locations are Mount Mansfield, Lake Champlain, Shelburne Museum, Killington Ski Resort, and Green Mountain National Forest. Vermont’s economy thrives in the major industries such as manufacturing, agriculture, service industry, energy, and technology.