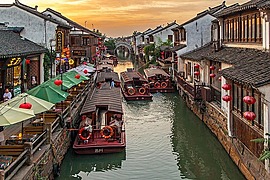 Suzhou, often dubbed as the Venice of the East or Venice of China, is the second largest city in the Jiangsu province, with a population of over 10.7 million people. A major economic center and focal point of trade and commerce, Suzhou is comparably an affluent, educated, middle class city with a big tech sector and services industry. Suzhou is home to over 60 historic gardens, playing a major role in the Chinese economy for years, considered a UNESCO Heritage Site. The city is also known as the capital of silk, and produces more laptops than any other location in the world. Suzhou is one of the 20 most popular cities in China for tourists with several water towns, and other tourist attractions including Tiger Hill, Tongli Water Town, Lingering Garden, Master of Nets Garden, Suzhou Museum, Chaozong Pavillion, and Pingjiang Road.