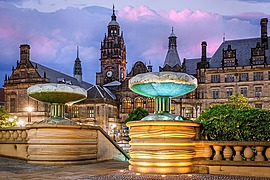 An industrial city, Sheffield was once recognized as the capital of the world for steel, cutlery, and tool-making. Its light trades were very distinct in character and structure in comparison to the heavy industries, but were equally significant in the city's development. It has gone from one of the industrial powerhouses of England to a rising star of the UK’s arts and culture scene.

The University of Sheffield