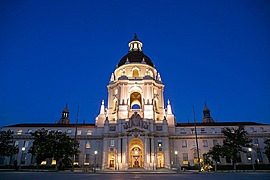 Also known as Old Town, Pasadena is a classic downtown district listed among Southern California’s most walkable. Stroll along the city where you’ll find shops, restaurants, and bars housed in turn-of-the-century brick buildings. The city’s nature park is one of the most accessible and easygoing trails where you’ll truly feel like you’ve slipped into the wilderness. Pasadena is also famous for the Rose Bowl, a 90,000-seat stadium that has been used for college football playoffs, the World Cup final, Olympic cycling, Jay-Z and Beyoncé tours, and a yearly fireworks show every Fourth of July.