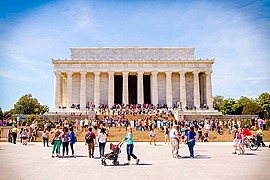 Washington, D.C., formally known as the District of Columbia, is the Capital of the United States, and is the 20th most populous city in the United States with a population of over 700,000 residents. Known for their museums, monuments, and culture, DC is home to tons of national museums, and houses more than 175 embassies and international cultural centers. Washington is also a multi diverse state with over 180 different languages being used. The District of Columbia is treated as a state-equivalent by the U.S. Census Bureau, home to many cultural attractions such as the world’s largest obelisk known as The Washington Monument. The District of Columbia is also known for the D.C. Metro, the second busiest subway system in the United States. Some of the famous attractions include the US Capitol and Capitol Hill, the White House, Lincoln Memorial, National Zoological Park, National Bonsai and Penjing Museum.

More about District of Columbia