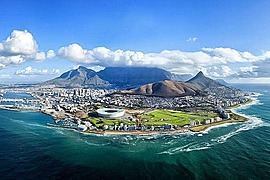 Cape Town is one of South Africa’s most historically important cities. It was here where the first European colonists set foot in South Africa, which also marked the beginning of the South African slave trade. While it has been named one of the top five Blue Skies Cities in the world, the city also has weather. Visiting different suburbs on different sides of the mountain can show you four seasons in one day.