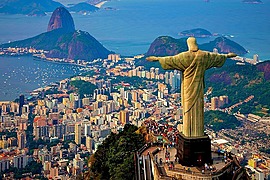 Brazil is the largest country in South America, and the fifth-largest nation in the world with over 211 million people. With a unique environmental heritage, Brazil has an estimate of four million plant and animal species, making it one of 17 megadiverse countries. Brazil is well known for its dense forests, including the Amazon, the world’s largest jungle in the north. With its diversity of culture, the country is recognized for its rich religious, musical, and culinary culture, known as the world’s major breadbaskets, being the largest producer of coffee for the past 150 years. Brazil is also home to the world’s largest carnival – Rio Carnival, and home to the most devoted football enthusiasts. Brazil is a founding member of the United Nations, the G20, BRICS, Mercosul, Organization of American States, Organization of Ibero-American States and the Community of Portuguese Language Countries.