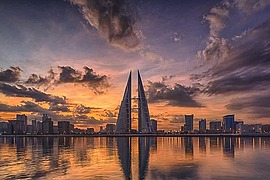 Bahrain, officially known as the Kingdom of Bahrain, is the smallest of Arabic countries, and the third-smallest country in Asia with a population of over 1.6 million people. With the country’s name translating to two seas for its possession of both sweetwater springs and salty water in the seas, Bahrain boasts its world-famous pearl fisheries and antiquity. The kingdom has five designated protected nature areas, four of them marine environments, with diverse and extensive seagrass beds and mudflats. Bahrain is considered the fastest growing financial center in the Middle East, based on a free and open economic policy that thrives in the industries of oil and gas, banking and finance, tourist, exports, and other major industrial sectors, such as food processing, garment manufacturing, engineering and handicrafts, are flourishing. Bahrain is a tourist destination and one of the most visited countries in the Middle East, which combines modern Arab culture and historic places including Bahrain World Trade Center, Al Fateh Grand Mosque, Bahrain National Museum, Bahrain International Circuit, and Al Khamis Mosque.