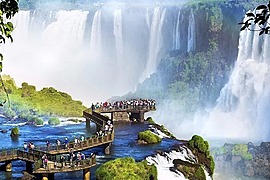 Argentina is the eighth-largest country in the world and the largest Spanish-speaking nation, with a population of over 44 million people. The country’s capital and largest city is Buenos Aires. Despite periods of economic problems in the 20th and early 21st centuries, Argentina has become one of the wealthiest Latin American countries, which benefits from natural resources including oil, silver, and copper. The country also thrives from an export-oriented agricultural sector, and a diversified industrial base. Argentina is a highly literate population, with 97% of the population being well-educated. The country’s favorite sport is soccer or football, and is rich in animal and plant species. Argentina is also a founding member of the United Nations, World Bank, World Trade Organization, Mercosur, Community of Lati American and Caribbean States and the Organization of Ibero-American States.