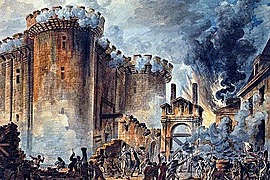 The French Revolution of 1789 was a period of social and political uprising in France when the people overthrew the monarchy and took control of the government. The famous slogan ‘Liberty, Equality and Fraternity’ called for every person’s right to freedom and equal treatment. It played a critical role in shaping modern nations by showing the world the power inherent in the will of the people, widely-regarded as the turning point in the history of Europe and North America, where many of the same ideas influenced the Declaration of Independence and the American Revolution. The French Revolution completely changed the social and political structure of France. It put an end to the French monarchy, feudalism, and took political power from the Catholic church.

More about French Revolution of 1789