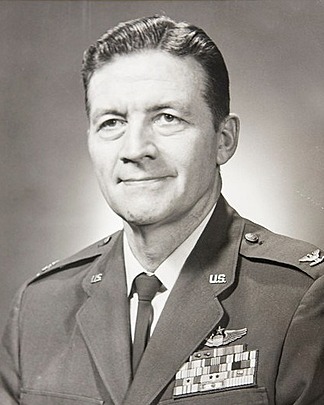 During the 1950s, John Boyd dominated fighter aviation in the U.S. Air Force. His fame came on the wings of the quirky and treacherous F-100; the infamous "Hun." Boyd was known throughout the Air Force as "Forty-Second Boyd," because he had a standing offer to all pilots that if they could defeat them in simulated air-to-air combat in under 40 seconds, he would pay them $40. Like any gunslinger with a name and a reputation, he was called out many times. As an instructor at the Fighter Weapons School (FWS) at Nellis AFB, he fought students, cadre pilots, Marine and Navy pilots, and pilots from a dozen countries, who were attending the FWS as part of the Mutual Defense Assistance Pact. He never lost.

John Boyd is the author of

Boyd was famous for a maneuver he called "flat-plating the bird." He would be in the defensive position with a challenger tight on his tail, both pulling heavy Gs, when he would suddenly pull the stick full aft, brace his elbows on either side of the cockpit, so the stick would not move laterally, and stomp the rudder. It was as if a manhole cover were sailing through the air and then suddenly flipped 90 degrees. The underside of the fuselage, wings, and horizontal stabilizer became a speed brake that slowed the Hun from 400 knots to 150 knots in seconds. The pursuing pilot was thrown forward and now Boyd was on his tail radioing "Guns. Guns. Guns."

The myth of "Forty-Second Boyd" still rankles AF fighter pilots. They say there is no "best" pilot; that everyone has a bad day. But if they went through Nellis in the late 1950s, they know Boyd had no bad days. And they cannot come up with the name of anyone who ever defeated him.

Boyd was equally famous in the classroom where he developed the "Aerial Attack Study." Until Boyd came along, fighter pilots thought that air combat was an art rather than a science; that it could never be codified. Boyd proved them wrong when he demonstrated that for every maneuver there is a series of counter maneuvers. And there is a counter to every counter. Afterward, when fighter pilots attacked (or were attacked), they knew every option open to their adversary and how to respond.