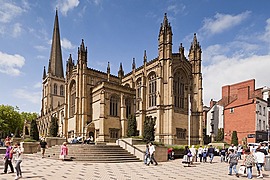 Wakefield is a cathedral city and metropolitan borough, a local government district in West Yorkshire, England known for its coal-mining heritage and rhubarb. The Hepworth, the National Coal Mining Museum for England, and the Yorkshire Sculpture Park are among the list of places the residents and visitors love to explore. In 2010, Wakefield was named as the United Kingdom’s third most musical city.