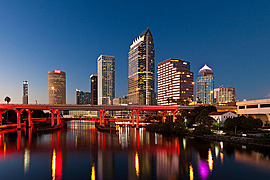 A city on Tampa Bay along Florida’s Gulf Coast, Tampa is a major business center also known for its museum and other cultural offerings. The third-largest city in the state of Florida, Tampa is part of the metropolitan area most commonly referred to as the "Tampa Bay Area". Tampa is best known for its tourist attractions, especially Busch Gardens, where families get the thrill of an amusement park and the fun of a zoo all in one place. With an annual growth rate of 1.63%, Downtown Tampa is an area of high-rise office blocks, but Tampa also has historic old quarters, such as Ybor City and Old Hyde Park.