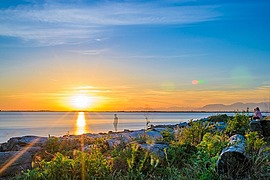 Known as the most wooded county in England, Surrey is a place full of nature and greenery. Steeped in history and heritage, Surrey is no stranger to ancient folklore and fiction. From dragons slain at West Clandon by a soldier and his dog to dreams of a magic pike predicting greatness for a mother's son, the Surrey cloth maker's boy who later became the Archbishop of Canterbury, George Abbot.