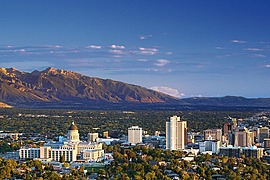 Salt Lake City is the capital and most populous city in the state of Utah, known for its stunning backdrop by the Wasatch Mountains and the Great Salt Lake. Home to more than 200,000 people, this city is full of diverse neighborhoods and the largest metropolitan area in Utah. Salt Lake City is a center for arts and culture, offering a variety of museums and performing arts, and home to major sports teams. It also thrives on entertainment options, including country western line dancing, jazz and blues, rock n' roll, and more. Salt Lake City is also home to three Fortune 1000 companies, the world’s largest copper mine – the Bingham Canyon Mine. Although the city’s economy is primarily service-oriented, Salt Lake City is also the largest industrial banking center in the United States.

The University of Utah