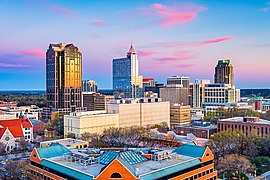 Raleigh is the capital and second-largest city in the state of North Carolina, with a population of over 470,000 people. Known as the “City of Oaks” due to the prevalence of oak trees in the area, the city is also known for more than 40 free historic attractions and museums, with a diverse performing arts and music scene, consisting of theatres, operas, and symphonies. Raleigh is one of the fastest-growing cities in the country, recently ranking as #1 Best City for Quality of Life in the United States by Numbeo. The city is also known for their high educational literacy, and incredible educational opportunities, including Living Arts College, Meredith College, Shaw University, and North Carolina State University. Raleigh is also one of the world’s greatest technological research parks, housing companies like Lenovo, Sony Ericsson, IBM, Nortel Networks, and Cisco.