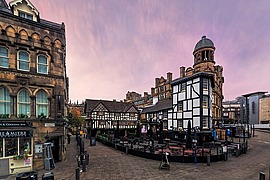 Manchester is a city and metropolitan borough in Greater Manchester, known as England’s second city. The third most visited city in the UK, it is also the third most populated city with over 500,000 people. It is notable for its great architecture, culture, musical exports, media links, engineering outputs, social impact, sports clubs and transport connections. Once a powerhouse industry considered as the world’s first industrial city, Manchester has grown to be a major cultural hub, famous for its many nightclubs, extensive libraries and glorious sporting history. The world’s first professional football league was founded in a Manchester hotel, and Manchester is also home to Chetham’s Library, which opened back in 1653 as the UK's first public library. This city is the setting for the first splitting of an atom. Manchester has been consistently voted the best UK city to live in, for the past several years.

The University of Manchester