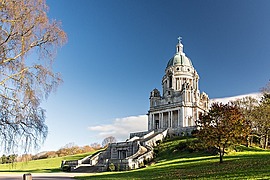 Lancaster is a city and the traditional county town of Lancashire, England, that has a fascinating history, with royal connections. It is a small city, considered as one of England’s Heritage Cities, with a population of over 50,000 residents. Known for its old castle and numerous Victorian buildings, Lancaster also offers a variety of museums such as the City Museum in the MarketPlace, Judges Lodgings, Doll Museum and the Maritime museum, to name a few. Of national importance is Lancaster Castle, a Grade 1 listed building which sits in the centre of the city on a hilltop on the site of three successive Roman forts. Today Lancaster is a thriving and vibrant university city, with Lancaster University main campus lying a few miles south. The city also offers many free art and music festivals throughout the year. Among Lancaster’s other popular tourist attractions include Williamson Park, Ashton Memorial, Lancaster Priory Church, Lancaster Cathedral, and Forest of Bowland.