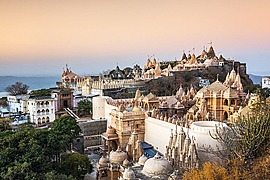 Gujarat, India's westernmost state, encompasses the entire Kathiawar Peninsula (Saurashtra) as well as the surrounding area on the mainland. Gujarat draws its name from the Gurjara (supposedly a subtribe of the Huns), who ruled the area during the 8th and 9th centuries ce. The state assumed its present form in 1960, when the former Bombay state was divided between Maharashtra and Gujarat on the basis of language. Along with Bihar and Nagaland, Gujarat is one of the three Indian states to prohibit the sale of alcohol. Gir Forest National Park in Gujarat is home of the only wild population of the Asiatic lion in the world.