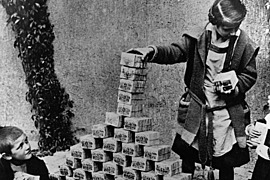 The occupation of the Weimar government in 1923 resulted in a general strike. Whilst the workers were on strike, fewer industrial goods were being produced, which weakened the economy still further. In order to pay the striking workers, the government simply printed more money. This flood of money led to hyperinflation as the more money was printed, the more prices rose. By autumn 1923, it cost more to print a note than the note was worth.