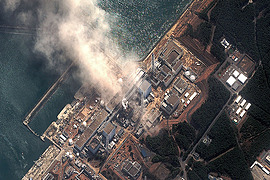 The Fukushima Nuclear Meltdown, also known as the The Fukushima Daiichi nuclear disaster, was caused by an unprecedented triple disaster. Starting from a 9.0M earthquake that occurred off the northeast of Japan, it then triggered a large tsunami that rose a height over 30 meters, travelling as far as 10km inland. These disasters damaged Japan’s oldest nuclear power plant, prompting a series of equipment failures, nuclear meltdowns, and releases of radioactive materials at the Fukushima nuclear power plant, which claimed over 16,000 lives. It is the largest nuclear disaster since Chernobyl in 1986 and only the second disaster to measure Level 7 on the International Nuclear Event Scale. There have been no deaths or cases of radiation sickness from the nuclear accident, but over 100,000 people were evacuated from their homes to ensure this.