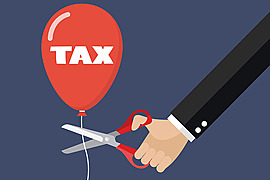 Tax cuts, also referred to as tax deductions, loopholes, or credits, are reductions to the amount of citizens’ money that goes toward government revenue. Congress can cut taxes on income, profits, sales, or assets. They can be a one-time rebate, a reduction in the overall rate, or a tax credit. Often in many forms, these cuts constitute a decrease in the real income of the government and an increase in the real income of those whose tax rates have been lowered. Advocates of tax cuts argue that reducing taxes improves the economy by boosting spending.