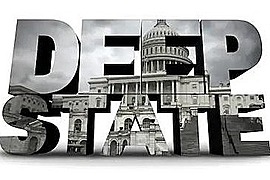 The Deep State is believed to be a clandestine network entrenched inside the government, bureaucracy, intelligence agencies, and other governmental entities. With the term originally from Turkey, it tells that the deep state is a theory that the government is composed of high-level elements that controls state policy behind the scenes, while the democratically-elected process and elected officials are merely figureheads. Deep State has since come to mean any unelected “shadow government” operating behind the scenes of a democracy.

More about The Deep State