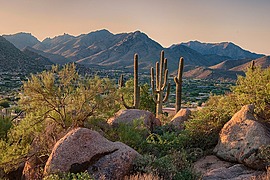 Tucson is the second most populated city in Arizona with over 980,000 people. Home to a major university and a thriving arts, music and food scene, Tucson is also a populous vacation and health resort due to its sunny, mild, dry climate and unique desert location that leads to great outdoor activities. Tucson is also home to world-famous University of Arizona, and known for their tremendous bird species, second to the Amazon Rainforest. There are also five mountain ranges in the Tucson area: The Catalina's, The Tortolita's, The Tucson Mountains, The Rincon's and the Santa Rita's. Some of Tucson’s major tourist attractions include the Arizona-Sonora Desert Museum, Old Tucson Studios, Tohono Chul Park, Pima Air and Space Museum, and Saguaro National Park. The city’s economy revolves around tourism, and other major industries, including aerospace and missile production, high-technology, optics, biotechnology, environmental technology, software, and electronics.