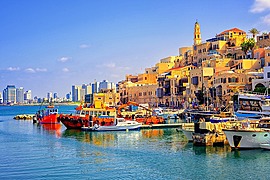 Tel Aviv-Yafo, also known as Tel Aviv, is the economic and technological center of Israel. The second largest city in the country, it has a population of over 450,000 – the most populous city in the Guush Dan metropolitan area. Known as the Mediterranean Capital of Cool, it boasts thirteen official beaches, combining it with a buzzing world-class nightlife, cultural scene, incredible food, and recognized architecture. Also a center of culture, Tel Aviv has 18 out of Israel’s 35 performing arts centers, and a manufacturing center of excellent desserts. The city is also known as a global city, ranking 25th in the Global Financial Centres Index, having the fourth largest economy in the Middle East.