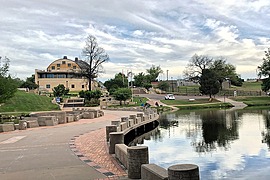 San Angelo is a virtual oasis with its three lakes, as well as the beautiful Concho River which runs through the heart of the city. Home to over 100,000 people, San Angelo offers a delightful mixture of arts and culture with its live theatre at the state’s longest-running theatre, Angelo Civic Theatre, along with its other entertainment offerings including artistic alleys, historic murals, internationally acclaimed waterlilies and the pink-hued Concho pearls. The city has many nicknames such as Angelo, the Concho City, the Pearl of the Conchos, and the Oasis of West Texas. It also features great trails and wildlife, and the best-preserved forts in the United States. The city also hosts many festivals including the Concho Valley Bluegrass Festival, Texas Mesquite Art Festival, and Festival on the Concho.