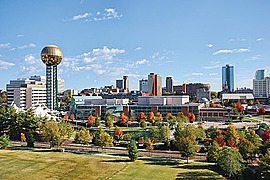 Knoxville is a city located in the epicentre of the Tennessee valley. Known as the “Marble City” due to its establishment’s structure, it is also called the “Cradle of Country Music”, given the music’s roots back in the city. The City of Knoxville was the first capital of Tennessee, and one of the largest cities in the Appalachian region, positioning itself as a repository of Appalachian culture. With a population of over 187,000 people, Knoxville is known as a gateway to visiting notable landmarks like the Great Smoky Mountains National Park, and is the home of the flagship campus of the University of Tennessee. After the arrival of the railroads in the 1850s, Knoxville grew to become a major wholesaling and manufacturing center. Today, Knoxville’s economy thrives on major corporations, retail, real estate, finance, manufacturing, and technology and research.