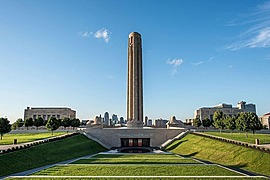 Kansas City is widely known as the “City of Fountains” as it boasts more outdoor water features than any other city. Combining the old and new, city and prairie, Kansas City is the largest city in Missouri by population and area, making it the 38th most-populous city in the United States. Kansas City is a known metropolis with activities and attractions for visitors of all ages and interests, with music enthusiasts drawn to jazz clubs, and museums covering everything from jazz music to a celebration of African-American baseball players. A major distribution centre, the city is one of the largest rail hubs in the country and an important trucking centre, other attractions include Science City at Union Station, the Kansas City Zoo, and the Arabia Steamboat Museum.