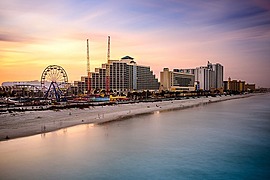 Best known for its wide beach and smooth, hard-packed sands, the city of Daytona Beach became famous for high-speed automobile testing which later on developed to racing. This made the beach a mecca for racing enthusiasts. It has been called the “World’s Most Famous Beach“ since the 1920s.