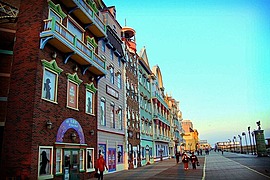 With a population of 77,344. Camden is the 12th most populous municipality in New Jersey. A city and the county seat of Camden County, New Jersey, United States, it is made up of over twenty different neighborhoods. The Camden waterfront holds three tourist attractions, the USS New Jersey; the BB&T Pavilion; and the Adventure Aquarium. The city is the home of Rutgers University–Camden, which was founded as the South Jersey Law School in 1926, and Cooper Medical School of Rowan University, which opened in 2012.