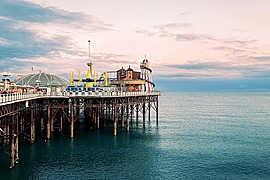 A seaside resort, Brighton's location has made it a primary destination for tourists. The city is also famous for its diverse communities, large cultural scene, and quirky shopping areas. Its large LGBT population led to Brighton's recognition as the "unofficial gay capital of the United Kingdom." In the Georgian era, Brighton has developed to be a fashionable seaside resort. It continued to grow as a major center of tourism following the arrival of the railways in 1841, becoming a popular destination for day-trippers from London.