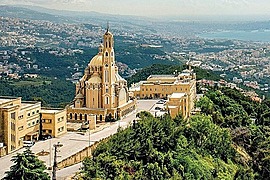 A popular local legend says that Beirut was destroyed seven times. And seven times it was rebuilt. In the 1960s, the city was known for its vibrant social scene, attracting artists and glamorous jet-setters. Located on the Mediterranean Sea and fringed by dramatic mountains, the city, with its intellectual lifestyle, had earned itself the nickname Paris of the Middle East.