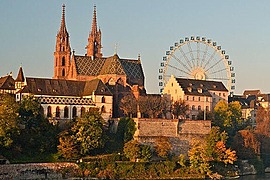 Basel is a city in Switzerland popularly known for its rich architecture of old and new high-quality contemporary architecture. Home to 40 museums, the city has the highest concentration of museums in the country with a large industry of cultural attractions. With its medieval old town center, Basel boasts a vibrant Carnival known as the Fasnacht - a three-day event considered as the most important celebration for its people. Basel is also a green city with Botanical Gardens and several parks, while also being considered as a cosmopolitan city with its universities and industry. The city of Basel is Switzerland's second-largest economic centre after the city of Zürich, ranked among the ten most liveable cities in the world by Mercer together with Zürich and Geneva.