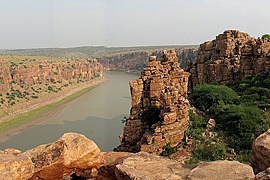 Andhra Pradesh is the eighth largest and the tenth most populous state with a population with over 49.3 million inhabitants. Known as the Rice Bowl of India for being a major producer of rice, the state is also recognized for its historic forts, mouth-watering biryani, and huge diamond mines. Andhra also boasts of International Institute of Digital Technologies, India’s first premier digital technology institute, and Thimmamma Marrimanu, the world’s largest banyan tree. The region is also home to a variety of other pilgrimage centres, such as the Pancharama Kshetras, Mallikarjuna Jyotirlinga and Kodanda Rama Temple. The state's natural attractions include the beaches of Visakhapatnam, hill stations such as the Araku Valley and Horsley Hills, and the island of Konaseema in the Godavari River delta.