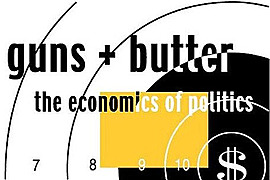 Guns and Butter Expansion generally refers to the dynamics involved in a federal government’s allocations to defense versus social programs when deciding on a budget. In a theoretical economy with only two goods, a choice must be made between how much of each good to produce. As an economy produces more guns it must reduce its production of butter, and vice versa. In macroeconomics, the guns versus butter model is an example of a simple production–possibility frontier. It demonstrates the relationship between a nation's investment in defense and civilian goods.

More about Guns and Butter Expansion