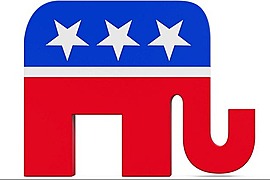 The Republican Party, also referred to as the GOP (abbreviation for Grand Old Party), is one of the two major political parties in the United States, the other being its historic rival, the Democratic Party. The party is named after republicanism, a major ideology of the American Revolution. Founded by anti-slavery activists, economic modernizers, ex National Republicans, ex Free Soilers and Whigs in 1854, the Republicans largely dominated politics nationally and in the majority of northern states between 1860 and 1932.